In this post, I am participating in Making Your Home a Haven, and Marriage Mondays.

I am so excited to get to this week’s challenge I want to breeze through last week, but I wont. 😛

So last week was about tenderness, and the suggestion was a serious pillow fight in the living room. We had a pillow fight, but in the interest of not breaking our TV, we had the pillow fight in the girls’ room – home to many pillow fights already! I gave back rubs to everyone and they all got into it and they were all giving back rubs to each other! Wee one #3 is in the ‘mimicking everything everyone does’ stage and was really, really into it. It was both heart warming and hilarious. I said last week that I don’t know how long the tenderness will last with the kids as they grow up, especially my son! You never know what the future holds, so for now I’ll take as many snuggled as he’ll give me!

This week’s challenge is to cook things that smell good. As anyone who has ever read my blog knows – I’ve got this locked down. I have considered cooking and baking to be art since I was a kid and first decorated cakes with my Mother and sugar cookies with my Granny. I cook every meal from scratch with the exception of lunch for the kids when they want something ‘fast and boring’. Even breakfast is pancakes or french toast or oatmeal (you know, the kind you actually cook in a pot and not the instant ‘just add boiling water’ kind).

Sometimes I fall in love with a recipe that uses store bought pre-made stuff, I’ll take it a step further (most of the time) and make as much of it from scratch as I can. It sounds a little crazy but I swear it’s never as much work as you think and the house smells so so so good!

These mummie hot dogs are a great example! The recipe I first saw used refrigerated crescent roll dough and hot dogs. While I am not above making my own sausages I do use regular hot dogs, but never pre-fab dough! So I took an extra 10 minutes (literally) and made some pizza dough to wrap around our hot dogs! 10-15 minutes in the oven at 350 and they were done. Even if you do use the pre made dough, the whole house will smell a lot yummier than it would if you just cook up some hot dogs and pop them in buns. 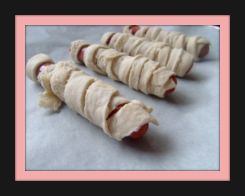 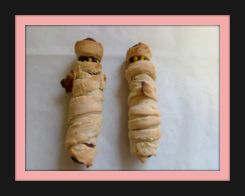 My kids are 10, 4 and 20 months and already I know they all associate me with the kitchen and yummy smells. I even started sneaking veggies into their treats a couple of years ago and no one noticed the chick peas in the chocolate chip cookies or the black beans in the brownies (thanks Gilly!!)

These candy corn cupcakes were made with apple sauce instead of oil and no one even notices! 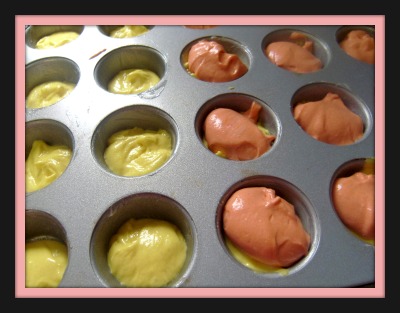 I made these cakeballs as Halloween treats for the kids classmates and they are made using mashed bananas instead of oil. The orange pumpkin though, he’s 100% orange candy melt, no nutrition there. 😉 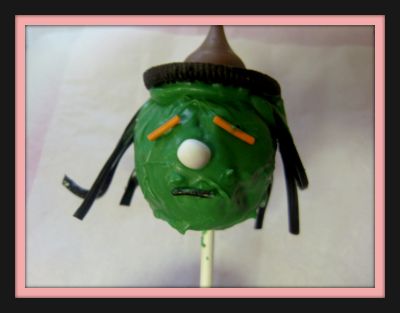 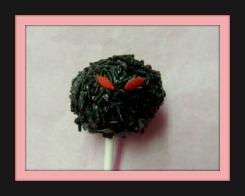 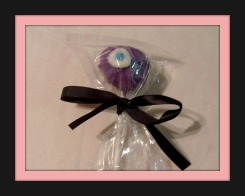 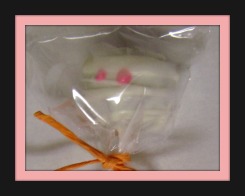 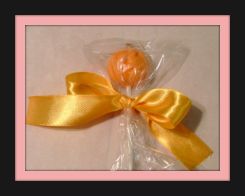 Of course there is a spiritual side to this too. The whole point of this challenge series is to make our homes more welcoming and inviting and full of love for our families. This only happens in the kitchen if you’re focusing on your family and your positive intentions while you’re in the cooking and baking. Have you ever seen an overstressed woman preparing a serious supper? It smells wonderful, but the moment a little one tries to cross the threshold into the kitchen, mama freaks out and wants the kids out of her way. It’s not about that, it’s not just the smell. It’s about the feeling of togetherness and warmth we’re creating, and coming from someone who is literally in the kitchen most of the day, I can say with certainty that sometimes it is a little stressful. But just like with everything else in life, when it gets too much for me, I give it up to God and feel a lot calmer. A kitchen that smells amazing is spoiled by a grouchy cook!

I am thankful that today’s post is food-focused so I can post about some of the fun treats I made and didn’t have a chance to post on Thursday and Friday. I’ll sneak in two more pics for this post! Chocolate coated and candy covered mini marshmallows! 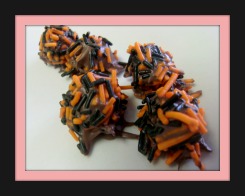 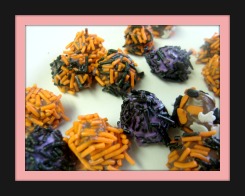 There will be a handful of Halloween treats left that I’ll save for another foodie post tomorrow. 🙂