If you’re not obsessed with Lost, this post can still be useful – I made the Classic Snowball Cake, which is something I think all domestic goddesses should know how to make. 😉 I have been hooked on Lost for a couple of years, I started watching all the episodes in order after the show had already been on the air for 3 or 4 seasons. Being able to watch so much of the show at once, it was pretty easy to develop an unhealthy obsession. I owed my friend Romi a birthday fete and she’s just as crazy for Lost as I am (and arguably more die hard, as she’s been loyal since ep 1, season 1), so I ran with it and her 2*th birthday was all about Lost. 😀 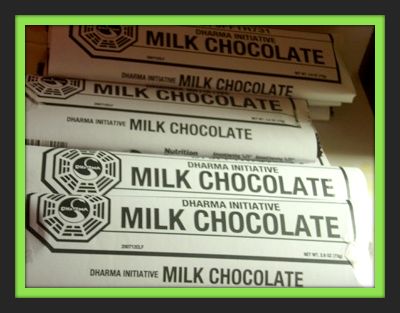 The Dharma labels are all courtesy of Max Pictures, who clearly also has a serious love for the show. Dharma chocolate bars were necessary, as Miss Romi loves chocolate. She’s also fond of red wine, so we needed to Dharamize that as well. We all had personalized boarding passes from Oceanic flight 815, except ours were all leaving Sydney and arriving in Toronto – don’t worry, we know the level of geeky we’ve risen to. What’s with the Dharma evaporated milk? Well, I am a baker you know, I always have to have this sort of thing on hand… 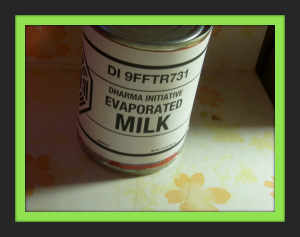 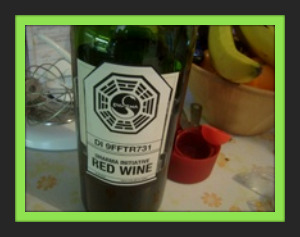 Instead of talking about the cake first, I’m going to go on about the icing, because the construction of the cake itself will likely steal the show. It’s one of those very simple, but very good (good in this instance refers to deliciousness, not good as in ‘good for you’, just to be clear) quick recipe from Kraft. It is just five horribly indulgent ingredients and takes maybe five minutes to pull together. 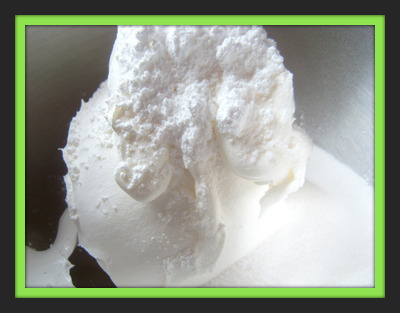 The cake itself is actually a plain chocolate cake, the recipe used a devil’s food cake mix but you can use your favourite chocolate cake recipe of course! For the snowball effect, the cake is made in an oven safe glass bowl.

Essentially, you whip up a chocolate cake and pour the batter into an oven safe bowl. Mix the cream cheese, egg and sugar, and put that on top of the cake batter. It’ll sink a bit as it bakes. Mine was still visible after it baked, so next time I will knock it down a bit. My concern was that knocking the bowl would make it sink too far but that doesn’t seem likely now. 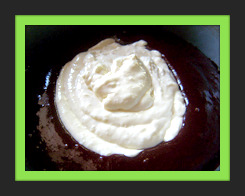 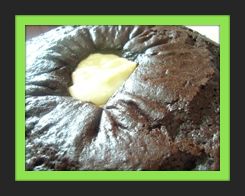 The video was helpful when putting this cake together, the only thing I didn’t do the same was sprinkle coconut on top because my sister hates coconut with the burning passion of 1000 suns, and naturally she was on the guest list. The candles are sparkly and have wee stars on them, because grown ups or not, birthdays are for being a little silly. Which is also why there are mini M&Ms on top!

The texture of this cake was amazing, I used my usual chocolate cake which is already pretty fantastic, but made so much better with this cream cheesy center! It’s not overpowering and just sweet enough. It’s two years in a row that I’ve made a cake with both vanilla and chocolate in it. We call it our ‘racial harmony’ cakes. 😉 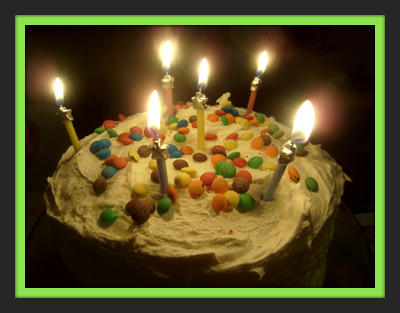 I also made Salsa Roll Ups, another quickie from Kraft. I end up with a very long ‘must try’ list after trolling that site for too long. I also made turkey-chicken meat balls, but I’ll save that recipe (courtesy of my Dad) for another post.

Mix the cream cheese with the salsa and spread onto the tortillas, then sprinkle on shredded cheese. Roll up the tortilla tightly.

Cut the logs into whatever length works for you, you may have to use toothpicks to keep the rolls secure. 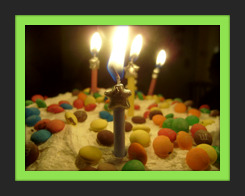 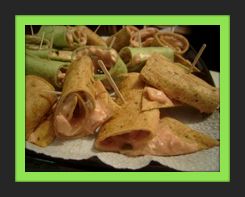 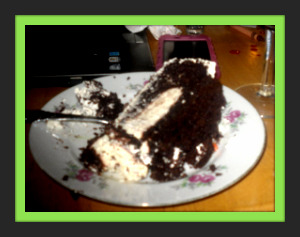 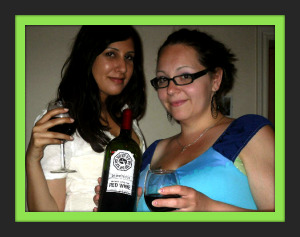