Wee one #3’s arrival was the most anticipated yet! Both her brother and sister were weeks early, so naturally we all assumed she’d be early as well. Imagine our collective surprise when she decided to arrive 3 days late! It’s amazing the things I put off or just didn’t do at all because I was so sure she was on her way. My Dad’s big 60th birthday party never happened (I will just have to throw him a big 61st party next year!), my parent’s 30th anniversary dinner didn’t happen either (is it weird to make a celebration out of 31 years next year?), and both Andrew and Talea’s birthdays did not have half as much detail as I had originally planned. Her Welcome to the World though, that was the most low-fi and equally fantastic night ever. Four of my dearest (missed the other dearests not there though) friends were here to introduce themselves and give her a snuggle. 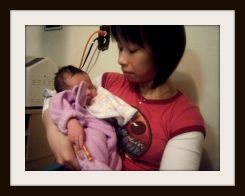 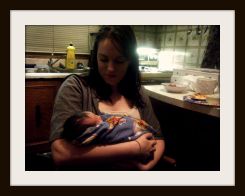 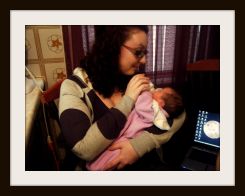 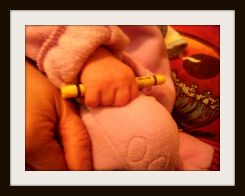 Technically, Andrew didn’t actually give her a snuggle, but he did put a crayon in her hand that she held for a loooong time and I thought that was painfully sweet.

The only thing I put together for his little gathering was a chocolate-strawberry pie and it was so simple to make it’s embarrassing to admit. The crust was just Becel and cookie crumbs, the filling was from scratch vanilla pudding (which really doesn’t require much more effort than instant pudding, unless you count turning on the stove effort), and the top was just sliced strawberries. I was a little blown away by how good it was, and even more blown away by how much everyone else loved it. It’s been named best pie so far. 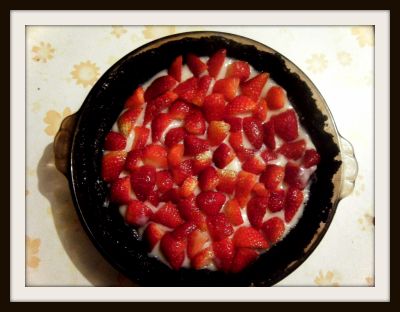 After the excitement of bringing home a new baby, it takes some time to come down from it all. It’s also hard not to just stare at her sleeping all day, so between the laundry and the other two wee ones, a few birthdays slipped past me! The first is for a dear friend’s cousin, and I wasn’t actually going to make her anything but I found a pattern for a cute monster and I remembered that she got some really rad monsters for Christmas last year so I casted on for her – on her birthday – so she wasn’t done for a while. Here she is finished, yes without a face, I just didn’t think my yarn selection allowed for a face. 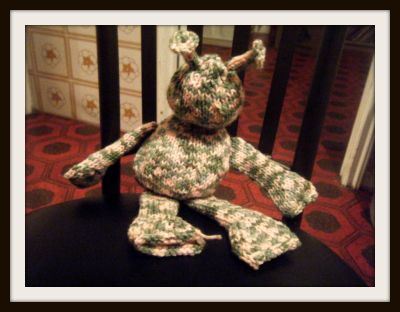 One of the husband machine’s Uncles and one of his cousins have had birthdays in the last two weeks, so I made up cards for them. It’s a wee gesture, but it’s important for them to know that late or not, we’re thinking of them. 🙂

It’s also my Mother-in-law’s birthday. She was here visiting on her actual birthday and we gave her a card because I hadn’t finished two little gifts I was working on, and I hadn’t even ordered the yarn for her birthday socks yet! Truthfully, I’m going to stop this post right now and order it! She’s allergic to a lot of yarn so the only safe bet is to use cotton. I’m going with The Butterfly Super 10 Cotton from Red Bird Knits in Persian – it’s a fantastic and rich red. I should have it by Thursday and hopefully a few late nights catching up on Lost with the husband machine and I’ll have her socks ready to mail out by this time next week. Now, if only Andrew’s Skull Socks of Fury would hurry up and knit themselves up! The other little gifts I’m making for my Mother-in-law are, silly as it may seem, an apple cozy from I Think I’m Gonna Purl and a banana cozy. She takes fruit with her to work and has mentioned that it gets banged up in her bag, these cozies should soften the blow.

This weekend we got back to the usual Stitch n Bitch night, and Gill pointed out that I really should have made soda bread and done up some green window decorations…though I suppose I could always host a late St Patty’s Day SnB next weekend. We’ll see, all of a sudden I have the urge to knit four leaf clovers. Thanks a lot Gill!

This week I made nectarine pie and in keeping with the new baby theme I cut wee teddy bears from the crust. It was really juicy and not at all too sweet. Of course, we ate it warm with french vanilla ice cream. 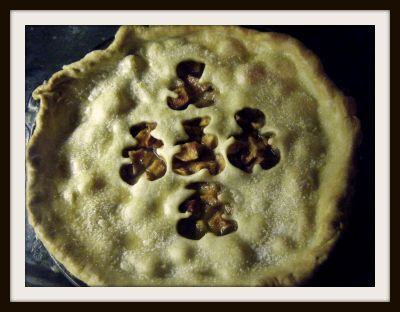 Over the last week or so I’ve been collecting ideas of things to knit for wee one #3, though all I’ve knit for her has been socks. That first pink, white and green pair and this purple pair. I’ve also just finished up a green set for wee one #1’s former teacher, who just had her first baby. 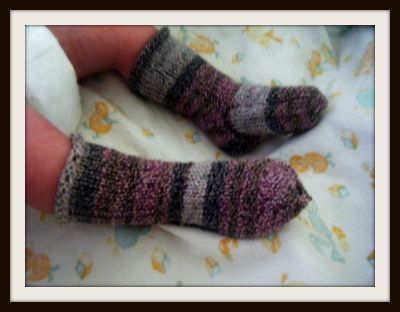 The next person to turn 29 this year is wee one #3’s Godmother, Lindsay. She’s having a few gatherings over the course of a week to celebrate and one of them is a ‘Girly-Tastic-Birthday-Fun-Time’ tea at the Four Seasons! Of all the ladies coming, one is pregnant and two of us have brand new babies that we’re bringing with us. I can’t find a pretty dress small enough for my 7lb baby to wear to tea, so I’m going to knit her up something snazzy – tea is this weekend though, so I’ve got six days to knit it up if we count today. Good thing it’s March Break and I’m up to all hours watching Lost and knitting anyway!

It’s so hard to pick a pattern! This one is my overall fave, but I’m not crazy about the ribbon. Just because I know from wee one #2 that bow is not going to stay tied up and will likely end up covered in some bodily fluid. I’m guessing it’s harder to get puke out of organza than cashmerino (which is surprisingly durable). Other options include this, which has no ribbon, but is too big and seems like it might be a serious headache to make it smaller and maybe this one, but I’m still undecided. I need to cast on tonight though so a decision must be made! Oh and I *must* sew this as well. Love it!

This week I’ll be working on that dress, maybe some small St Patty’s Day stuff for next weekend and once my yarn order gets here I’ll have to dig deep and find it somewhere in myself to stick to Andrew’s second skull sock until it’s done and not abandon it for snazzy new yarn. I can already feel myself crumbling and I just paid the invoice a few minutes ago…

I’m really excited for next week, getting ready for Lindsay’s birthday fete at my place!