In this blog post I am participating in Marriage Mondays, and on Wednesday I’ll add this link to Living Well Wednesdays

It’s Marriage Monday again! Last week, my Good Morning Girls group was talking about something Courtney had said in a recent blog post. Essentially, that if you bump a cup full of water, water will come out (duh lol) but that it’s the same with our hearts! If you have a heart full of frustration (or anger or resentment etc), that’s what will come out when you hit a bump! So if we work every day to fill our hearts with love and joy, that’s what will come out! I’ve been thinking about that a lot this week and it makes so much sense!

We are all human so it’s easy to do things that annoy the people around us, and it’s easy to let ourselves be annoyed. This morning, it is -37 with the wind chill and though I know I saw him wear it home on Friday, Wee One #1 could not find his hat as he was getting ready for the school bus – this bumped my cup. If I was already frustrated, (perhaps with him constantly losing tupperware at school), frustration would have spilled out and he would have taken off for the bus with a cloud over him and a chilly head. Instead I told him that he needed to keep track of his things, especially necessary things like that, and I gave him a spare hat! Had I reacted angrily or meanly, I may have ruined his day and likely mine too because I’d spend the rest of it feeling guilty!

My husband and I went to bed at 3:30 this morning because dear, dear friends we only get to spend time with once a year were here. When we went to bed he said he’d like to get up at 7:30 when I do – it is 10 and he is still sleeping. This doesn’t really bump my cup at the moment, but when he gets up in a few hours annoyed that I was unable to get him out of bed when he asked me to, I will not respond with anger or resentment for being the one that gets up early. I’ll make him and coffee and tell him playfully not to be so grumpy. When his Eeyore cloud passes I’ll be very happy that I didn’t incite an argument just because he can’t get by on as little sleep as I can.

I have tired to live like this since I noticed myself not paying attention to my reactions a couple of years ago and of course every day I can get better and better at it. I’m human so I’ll never totally get it right, but as long as everyone around me knows that I am trying, and if I get it right more often than not, it’s a win!

My husband works from home – we are incredibly blessed to be able to say that!! That means we are together pretty well all day, everyday. We each have things in our days that do not involve the other so we’re not as connected at the hip as that may sound, but being around each other this much could be horrible if we were not mindful of what’s in our cups!!

This version of Chicken Pot Pie is the short of shortcut my Granny would take and then never tell anyone about. She was up making muffins almost every day at 5am for her family, so she could take as many shortcuts as she needed to in my book!

Preheat your oven to 400. Thicken your chicken stock by taking a little and mixing it with about 1 tbsp or so of cornstarch, then add that back into the rest of the chicken stock. The original recipe calls for cream of chicken soup, I’ve also seen it done with a can of gravy (!) but my husband likes it best with thickened chicken stock. 🙂 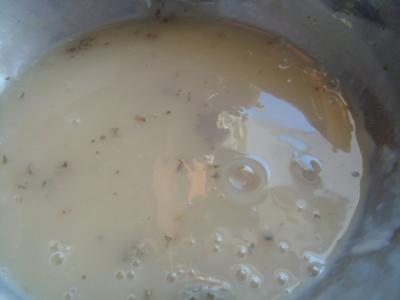 Mix 1 cup of the Bisquick, 1/2 cup of the milk and 1 egg together and pour that into the bottom of your pie pans (of course you could also just use a big pie pan), and bake for about 15 minutes. 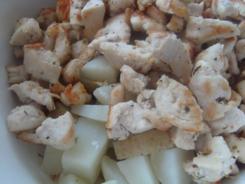 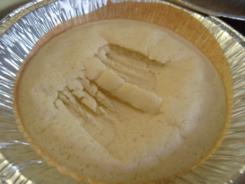 Meanwhile, stir the veggies, chicken and thickened chicken stock (or soup or gravy) together. Once the bottom crusts are ready, pour this mixture over them. I made little fork indentations in the bottom crusts because they puff up a bit. The mix the rest of the Bisquick, milk and remaining egg and pour over top the veggie and chicken mixture. 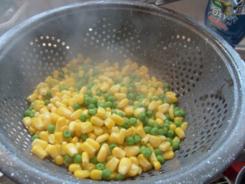 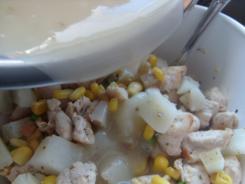 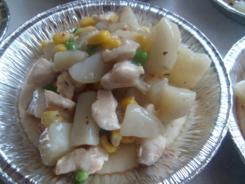 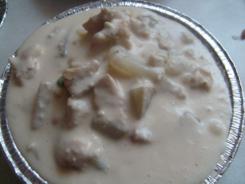 Cook this for another 25-35 minutes, till puffy and golden on top and voila! Amazingly simple chicken pot pie without rolling any pie crust at all! 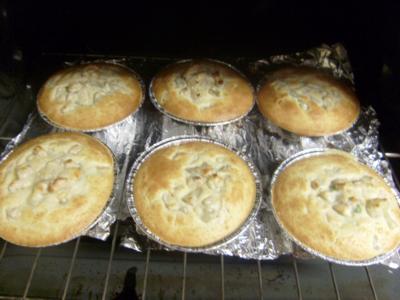 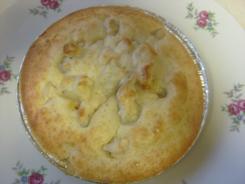 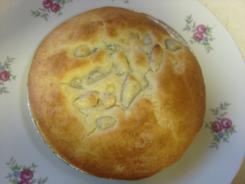 The original recipe just puts the veggies and chicken mix directly into the pan(s) with no bottom crust, so you only use half the Bisquick, milk and eggs but then you sacrifice having a bottom crust so it’s less a pie and more a savory cobbler situation.