The past few months have been a flurry of activity, and while I wouldn’t have it any other way, a few more hours in the day would be helpful.

I made a really interesting cake this past weekend for a friend’s 30th and I have had a good start to Cake Year! First though, and mostly just to show off some photos, here are a few of the things I didn’t blog about this holiday season.

I made heaps and heaps of brownies during the holidays, as I’m sure you can imagine. These made in the donut pan seemed especially fun for the kids for some reason, and this apple pie with a handful of chocolate chips was just silly – and delicious! 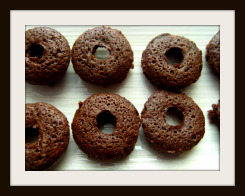 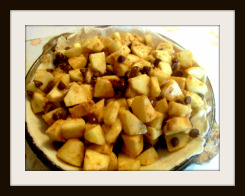 This year, Chinese New Year and Valentine’s Day landed on the same day, so we had a fete to celebrate both! There were a whole lot of glittery New Year decorations and a whole lot of shiny heart decorations. The kids had a party that afternoon, and one of their activities was cookie decorating. I made standard Sugar Cookies and Cocoa Brownies and set out frosting, sprinkles, candies and broken up treats in recycled pudding cups for easy access! 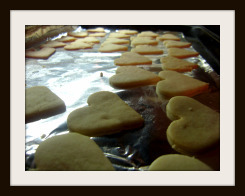 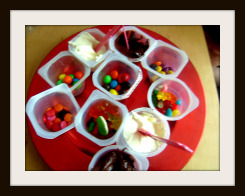 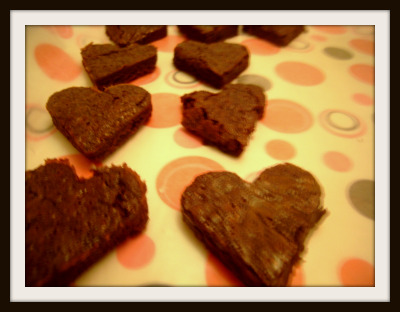 For their school parties, the kids hit Google to find ideas for their class treats. Wee one #1 went with Chocolate Covered Jumbo Marshmallows. We put some red sprinkles on while the chocolate was still wet. Wee one #2 picked Cinnamon Heart Kisses and Hugs Cupcakes, which I think explains itself really. Both treats were really fun to make and the kids classes loved them. Before anyone thinks I’ve left someone out, wee one #3 isn’t in school yet and is too small for treats. 😉 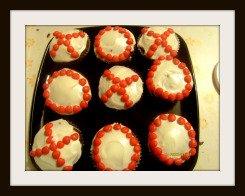 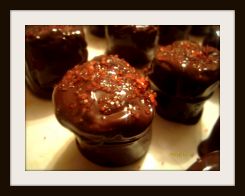 There are some really fun gems left out, like attempting a Jamie Oliver appetizer, and my cinnamon hippo cookies, but these were the most fun of the last few months. I can’t recap too much because I want to jump back in and show you the 10 cakes I’ve made so far this year!

The husband machine, our three wee ones and myself did some Christmas road tripping. It took us to three different cities in two weeks and we had a blast. On the way home, with our little car packed to the roof with kids, gifts and gear, I got a text from my amazing friend Gill, asking if we could do the first Stitch n Bitch of the year that night, and that she really, really wanted to make Red Velvet cake with me. I pretty much never turn down an evening with my ladies, so as soon as we got home, I prepped the kitchen for fun, fed the kids and within minutes Gill was here with her beau Andrew, and my sister, Nikki. Usually there are two more good friends that spend Saturday nights with us, but one was out of town and one was hanging with someone who is usually out of town.

So, the Red Velvet cake, as you can see, looked like a winter birthday cake! The cream cheese frosting wasn’t too cream cheesy, as they often are, and the chopped pecans were a really nice touch! None of us had ever made this cake before, and we were all a little alarmed at how much food colouring it takes to give it that red hue! It was amazing, definitely one of my faves so far, The look of the two red layers with the contrast of the white frosting was so pretty. 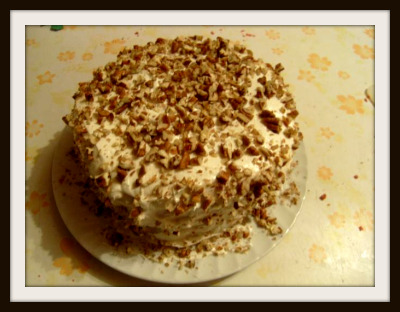 Inspiration for the second cake of the year came while browsing Chow. The photo of the cake was amazing, but they put a crunchy almond crust on the top of the cake (prepared in the pan before the batter was poured in), and I opted for a few ground up chocolate chips on top after I had already iced it. I used the recipe as is otherwise, and it turned out so good. 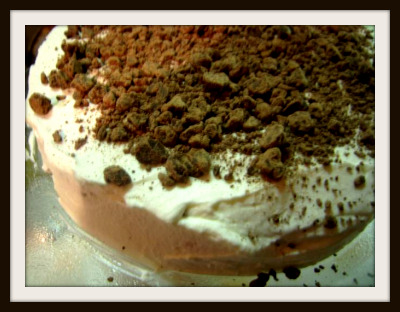 This Double Lemon Cake was made because the husband machine asked me to make him a Lemon Meringue pie, and I had a little lemon filling leftover. The cake itself is a standard lemon cake, really you can just sub some lemon juice for a liquid in your favourite vanilla cake and add in some lemon zest as well. It’s two layers, with the lemon filling from the pie I made earlier and buttercream tinted yellow. 😉 If you love lemon, you’d love this. 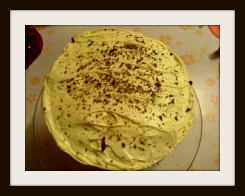 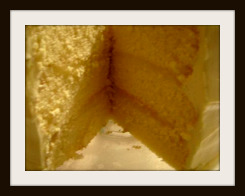 The fourth cake was made for Miss Talea’s financee, who she never refers to by name on her blog, so I’ll hold back. I made him a Brown Sugar cake, though he is away at med school and couldn’t enjoy it himself. This recipe was found on Bell’alimento, and yes, I covered mine in whipped cream too. I made two square layers, one smaller than the other and sprinkled cinnamon on top! 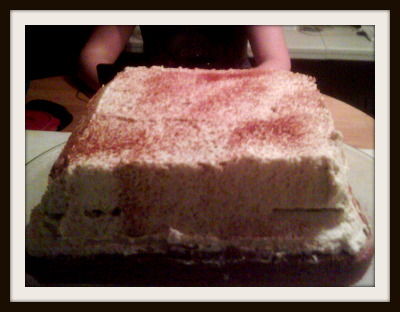 Cakes #5 and #6 were made on the same day – because we had a few more people than usual that week – to celebrate Miss America. We all just love how campy and silly it is, and we really rolled with it. We all wore tiaras and drank champagne (ok, sparkling wine) and had a lovely evening. Cake #5 was a Chocolate Coconut (which just means I added a little sweetened shredded coconut to the batter and sprinkled some on top once it was cooled). Cake #6 was exciting for me, as I had never made one before – a Black Forest cake! My mother used to make these a lot when I was a kid, my father loves them. This was a cake doctor-style recipe, to be honest. All I did was mix up a devil’s food cake mix with a few eggs, some water and an entire can of cherry pie filling. Once it was baked and cooled, I put a little dollop of whipped cream on each of the wee flutes in the cake and put a maraschino cherry on top. 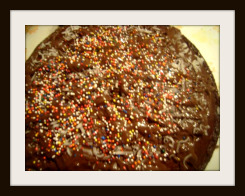 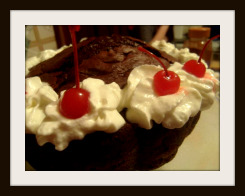 It’s hard to believe how genuinely excited I am over each of these cakes! Cake #7 was especially important because one of my closest friends, someone who has been coming out to my knitting nights for years, moved. Yup, Talea joined her fiancee somewhere that isn’t Toronto so they can live together as he finishes up med school. To celebrate all the joy and friendship and wine fueled nights we’ve all spent together, I made her a 10 Layer Smell You Later cake (inspired by the always amazing Bakerella) and invited only her very favourite people. It was a lovely night, but so so sad too. Moving on, the cake would have been more layers, but my husband machine was snacky and I had baked all the layers the night before. 😛 I assembled it with runny fudge as the glue that held it all together between all the layers. I coated the outside in it as well, but had to do as Bakerella suggested and make up some cocoa frosting and give it another layer. 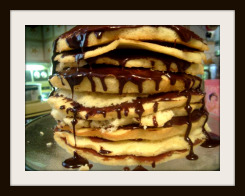 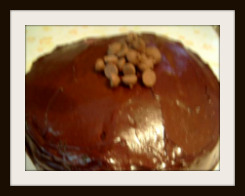 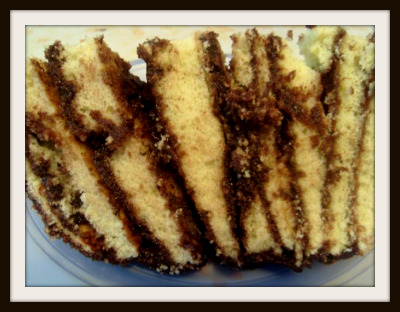 Two weeks ago, as you know, was both Chinese New Year and Valentine’s Day. Last year, I made a Mandarin cake because I thought that the traditional citrus fruit had to be made into something, but it doesn’t. Just leaving out a bowl of any kind of citrus fruit is enough! So I didn’t make a cake for Chinese New Year, but I made up a serious Chocolate Strawberry Shortcake for Valentine’s Day. It was plain chocolate, in a heart shape, topped with a pint of strawberries and loads of both whipped cream and cocoa frosting. Amazing. 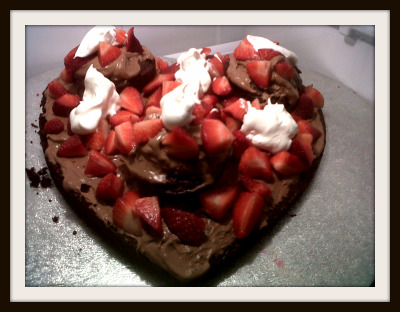 Even more amazing than that cake, Gill’s brother was on his way back from Thailand that day and even though he woke up on the other side of the planet and had a serious 12 hour jet lag to deal with, he came over to celebrate with us! Since he had been away for his birthday, I also whipped up a belated birthday cake – the one he picked weeks before – Chocolate and Peanut Butter! 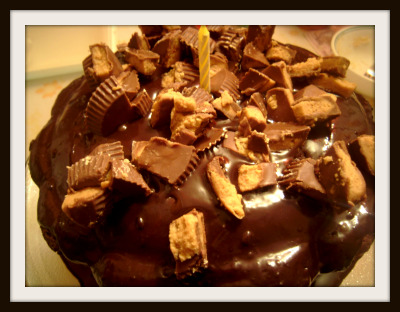 And finally, to be totally up to date, this past weekend, I made my weirdest cake yet – by request. I made Tres Leches (or 3 milk cake, if you prefer). It’s Spanish and while most of their cakes are really moist, this one is over the top. It was for Andrew’s 30th birthday, the first of us 1980 babies to turn 30 this year. He requested it partly because he has a thing for moist cakes and this one promised to be the moistest, and partly because any time I ever serve this man cake, he always puts it in a bowl or mug and pours milk over it. Always. 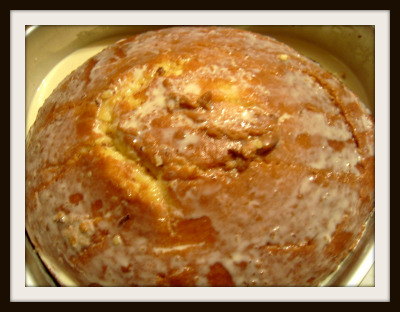 This cake starts out as a plain vanilla cake, though I’m sure you could sub in whatever kind of plain cake you’d like. Once your cake has baked and cooled (mostly), move it to a larger pan then poke holes all over the top of it and pour this mixture over it; 1 can evaporated milk, 1 can sweetened condensed milk, 1/2 cup whipping cream, 1/2 cup whole milk. You have to keep scooping up the mixture and pouring it over the cake for it to absorb it all. It’s nuts to see a cake soak up 3 cups of liquid in a few minutes.

You’ll notice there are actually four kinds of milk in this ‘three milk cake’. I actually looked into it more and traditionally the recipe has no whole milk in it, just whipping cream. The best part about this is two of us are lactose intolerant. Ha! I had a very small piece and then later in the night, I had another small piece. Andrew had several, so glad the birthday boy liked it. 😛 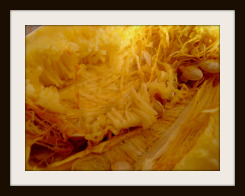 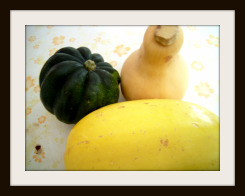 To go with the random theme of three, I also made three squash soup. Gill made her amazing pizza pinwheel bites and we all forgot about the soup. I will ask her about the recipe to post it one day.

Way more playing in the kitchen than knitting and sewing lately, as I’m sure you can tell, but I did manage to finish a very nice pair of socks, Marriage Lines, they were a late Christmas present to one of my dearest friends, Talea. 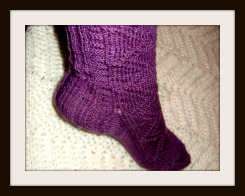