So everyone always says that checking your gauge is important and I’ve had a few close calls with socks, where I really needed to block them or there’s no way they’d fit but aside from socks I don’t generally knit things that need to fit. I like to knit accessories and silly things, like wee cats and veggies and pearls. Last week I cast on for a little dress for wee one #3, following the pattern exactly. It was coming together really nicely, though I hadn’t been able to try it on the wee-est one, mainly because she’s pretty much always sleeping and when she’s not she’s eating or having a bath or something far more interesting than trying on a dress. So three days go by and I’m done! All I had to do to be sure it wasn’t going to fit was walk it over to the cradle, just holding it next to her it was obvious. Boo! 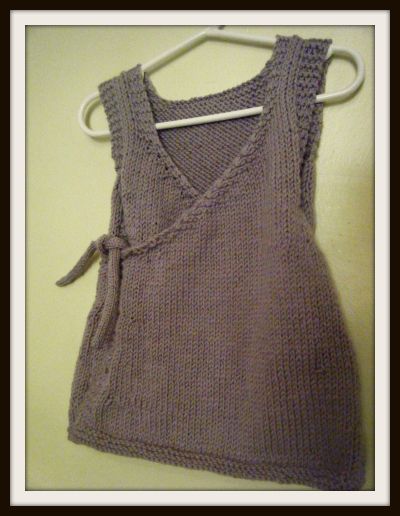 My first thought (after the initial let down wore off) was to try it on wee one #2 as a top. So I called her over and unlike her 3 week old sister, she pretty much lives to change her clothes so she was happy to participate. However! She pulled it over her head so roughly and tried to ram her hand through the armhole without looking at what she was doing. Just watching her put it on made me twitch. Doesn’t she know you can’t treat a Debbie Bliss cashmere-merino blend like that?! This is why I only ever knit her socks and toys, she is a monster truck trapped in a sweet little girl’s body. This wee dress will stay put on the hanger until this summer when there is a slight chance that the wee one it was intended for will be big enough to wear it.

Thankfully food doesn’t need to fit! The same day this happened, I made hamburgers, which is probably the one thing everyone in this house loves equally. I so love it when I make something that everyone, even my painfully specific husband machine, likes. 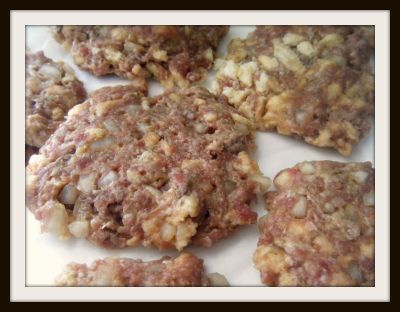 There isn’t much to them, though I suppose there isn’t much to most homemade hamburgers; beef, onions, garlic, an egg, torn bread pieces and a little bbq sauce. Simple and soooo good! Sometimes I put a little cheese on the inside as a wee surprise when you bite into them!

Last weekend probably should have been a St Patrick’s Day feast, but it wasn’t. Not even a little bit. Next year I will outdo myself to make up for it, I’ll even make soda bread! So while it wasn’t a green weekend, it was a fantastic time. I finally got to meet blogging buddy Romi, which was so much fun, and of course my usual Stitch n Bitch collective was here for the evening as well. I finally finished Andrew’s Skull Socks of Fury from last month. Man, hardly anyone gets a handmade birthday gift on time from me! I swore I’d make everyone something for each occasion this year, maybe next year I’ll swear to do it on time! 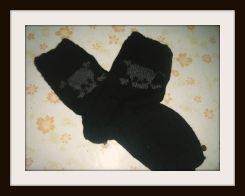 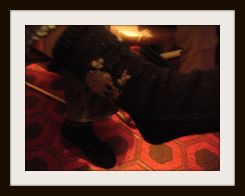 It’s hard to tell what the fit was going to be like with them laid flat on the counter, and I had weaved in ends for over an hour hoping that they’d fit because if not I’d be blocking them, intarsia or not! Thankfully, he tried them on immediately and they fit! Woot! They were worth every stitch, the yarn was superwash too, so it doesn’t matter much what he does to them, they’ll live.

This week’s pie was actually even easier to make than the strawberry topped one a couple of weeks ago! This was another chocolate crust, this time with chocolate mousse inside. I served the strawberries on the side to keep the decadent chocolate look of the pie. 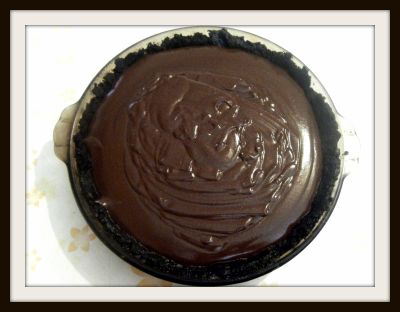 It was another simple but amazing pie, perfect for Romi’s first time at my house!

The sock yarn I was going on about last post from Red Bird Knits arrived, and even though I already know what it’s all going to be, it’s so exciting to have new sock yarn. I know, I know. I must be stopped! As intended, I picked up two hanks of cotton for my Mother in Law because she is allergic to the sock yarn I love to use (can you image? what a horrible disease to have!). Turns out that the yarn I picked from Red Bird Knits, the Super 10 from Butterfly is Greek! Not just Greek as in it’s made by a Greek, but Greek as in it’s imported from Greece and even has some Greek writing on it (Mom confirmed it just says Butterfly, but still…) 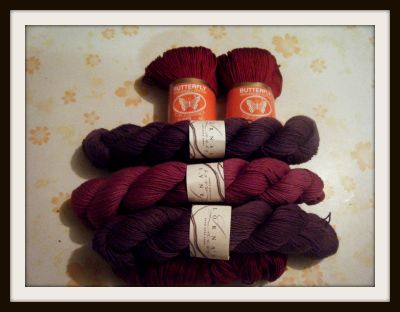 So the red is the cotton for the husband machine’s Mom’s socks, and while I was there I noticed some ‘nearly solid’ sock yarn from Lorna’s Laces. I know I have a heap of Lorna’s Laces already, but I was planning on knitting polka dot socks for my friend Lindsay’s birthday this weekend and I didn’t have enough of a solid sock yarn to make the background. I ended up changing the polka dot colour as well, on the husband machine’s suggestion that the pink and purple looked better together – he was right they look great. 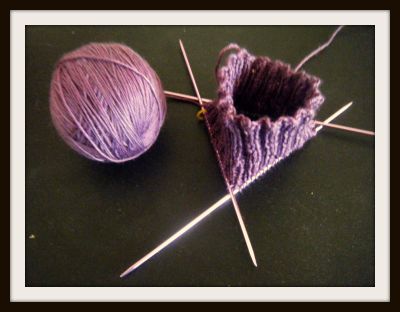 The purple is Blackberry and the pinkish one is Berry, I have managed to knit up about 3″ of polka dots on the leg of this sock since this photo was taken yesterday and they look fantastic! These colours together are way better than my original selection and much more ‘Lindsay’, I think she’ll be happy with them. No idea on when they’ll be done though, since there is other prep work that I have to do for her party this weekend.

Once Lindsay’s fete is over and before I get going on my Mother in Law’s socks, I need to take one afternoon to make some cloth diapers for wee one #3. I found some seriously cute cotton flannel. Hello skulls and cross bones on homemade cloth diapers!