Coming in about a week late, we had so many fun projects happening for Valentine’s Day I have to document them, late or not. The week of Valentine’s Day, I was excited (though honestly not surprised) that my oldest wee one (he’s 8 ) wanted to make his class valentines this year instead of buying those boring generic ones. We had a great time looking around online and in books together to come up with something a little different, but not so crazy we couldn’t get 21 of them done in four days. 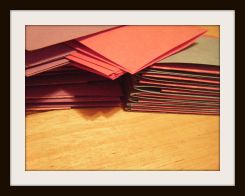 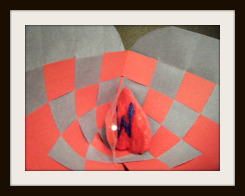 We went with paper weaving construction paper into heart pockets! We’ve all been on an origami kick lately, and this was so close to that (still no glue, but obviously, some cutting – here is the video we used). We made some pink and purple and then red and purple ones for the girls, and blue and red ones for the boys. We picked up some heart shaped lollipops and had time to make another little treat to tuck inside! 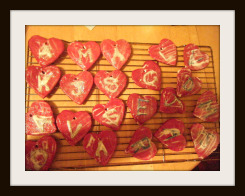 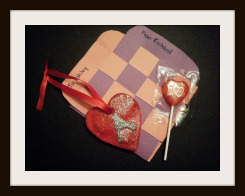 Salt dough valentines! I love making salt dough ornaments for pretty much any occasion. They’re so easy to whip up, and though there are a few steps to making them pretty once they’re out of the oven, the steps are so quick these are pretty easy little treats. It was his idea to make put everyone’s initial on them, and to put the girls’ trinkets on ribbons. Cute! 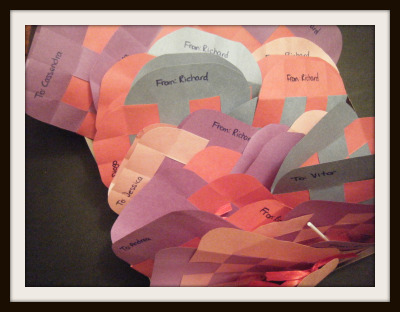 He took this tray along with a vanilla-banana cake for his party and we tucked a few knitted hearts in his teacher’s package. He said everyone in his class loved them, and is now plotting what to craft for next year!

With his school fete taken care of, I focused on our Valentine’s Stitch n Bitch that weekend. These wee bags first appeared in Martha in February 2004 and I have made them over and over again since then. They’ve been used as gift bags for tiny treasures, they’ve held small Easter chocolates and at one point were even used as tree ornaments. They’re really fun to make because the scale can be adjusted so easily and the theme changes with the paper you choose. Simple! 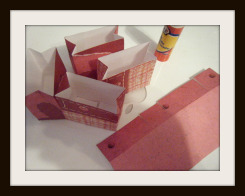 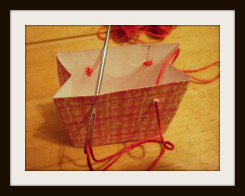 I filled them with mini lipsticks, a heart shaped brownie and a lipgloss inside a lipgloss cozy! The lipgloss cozies were so silly, but cute – essentially just a tube large enough for the lipgloss to fit into. 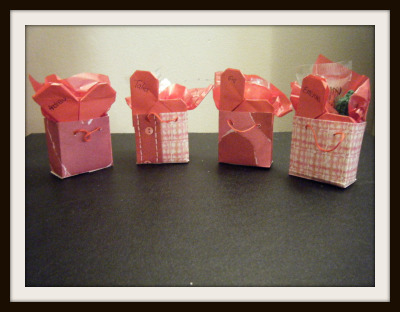 Here are four of the six of them pictured, made with Valentine’s themed scrapbooking paper and red embroidery floss. I also made a heap of origami hearts and wrote everyone’s name in the corner of them as tags. I had them scattered on the table as well, which was so festive and handy when we unexpectedly had a few extra friends over (always so much fun!). The video tutorial for those is here, and super easy for folks who haven’t done much origami at all. 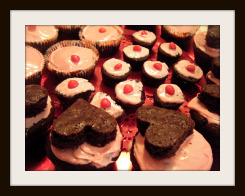 This week’s pie was Pear-Strawberry, adapted from the Pear-Raspberry that ran in this month’s Martha. I had intended to go with raspberries, but when I was at the market the selection was pretty sad and I went with the beautiful strawberries instead. It was insanely good. I also made a tray of cupcakes and brownies and even cupcakes with brownies stacked on top of them, because as you know, that’s just the way it is around here. The brownie-topped cupcakes are also from this month’s Martha. The others, both the regular cupcakes and the tiny ones are all standard chocolate cupcakes with pink-tinted vanilla frosting and a cinnamon heart on top.

We hosted a birthday party here last night for our dear friend Andrew, and it was hilarious. Full of fantastic food, crafty decorations and even some knitting! I’ll let you digest the Valentine’s post for now though.